The rhine valley based rock band "Black Diamonds" is currently on tour in Europe with the two Swedish bands H.E.A.T and degreed in a huge Nightliner. A big adventure for the local musicians, but also demands a lot from them. In a loose sequence, they give an insight into their tour life at this point.

The concert in Berlin was not sold out, but the atmosphere in the audience and in the band was still great. It was also the first stop in a city where the musicians saw only the bus and the concert hall. There was no time for exploration.

After the performance, the bus drove straight to Munich, where the guys were awaited by a big crowd - even a few familiar faces were there. That rocked a lot! In addition, it was the biggest stage of the tour so far, which really invited to let off steam.

Meanwhile, the band members only need about half the time for set up and for the sound checks - suddenly there is something like free time. Last week they even had a day off. A blessing, because the strains of the tour are slowly becoming noticeable.

The "Black Diamonds" enjoyed the peace and quiet of a campsite near Milan. Following another highlight, which was the concert in Kufstein. The audience and the musicians had a lot of fun, and the rhine valley rockers sold more merchandise articles than ever before - of course that had to be celebrated.

Once all the equipment of the three bands in the bus and trailer was stowed, there was a small aftershow party on the bus. Until 4 in the morning there was laughter and singing in place! And on Sunday (5 November), the "Black Diamonds" played for the first time in Italy. - Yeeaahhh !!! 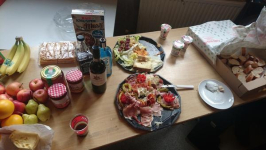 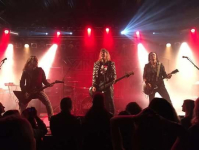